“This will be a day long remembered.” – Darth Vader.

To recap from the previous entry, I needed an alternate form of entry into the house and thus investigated interfacing with my garage door controller. The overall aim was to use my phone to open/close my garage door.

I decided to use the Arduino boards as a starting point. How exciting – a reason to purchase gadgets!

Now that I had established a method of interfacing with the garage door controller, I needed to design my end to end system.

As I wanted to avoid writing an app for my iPhone (I’ve managed to avoid it to date), I had several remaining choices for triggering the garage controller. I could either have used SMS to signal the controller, or have used a web page on the iPhone to signal the controller. Mind you I could have also used a phone call, rang the Arduino and then asked politely if it could open the door. That last option seemed a little excessive however.

Given I already had a web server deployed at home (who doesn’t?), I went with the web page option. This ultimately led me to look at the Arduino Ethernet Rev3 board.

So, I purchased my first ever Arduino board from element14 (au.element14.com). It arrived in the mail a short while later. 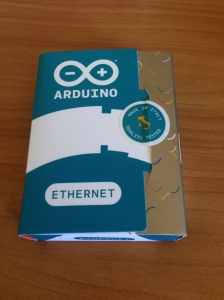 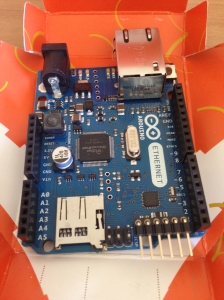 This unit, unlike the base Ardunio Uno board, does not have a built in USB port, but rather an Ethernet port instead. As such, when I purchased this board I also purchased an Arduino programming device which allows me to upload code to the Arduino from my PC/Mac.

This is the Arduino Serial Light Adapter, which I purchased from Core Electronics (www.core-electronics.com.au). It has an FTDI interface which connects directly onto the Arduino Ethernet board.

I downloaded the IDE (integrated development environment) from Arduino’s web site and installed it. It worked quite well on Windows 8.1 and Mac OS X 10.9. This is the tool used to write, compile and upload application code to the Arduino. This tool also has a Serial Monitor, so that you can read/write to the device through the COM port. This is very handy for outputting debug messages during testing that you can see through the monitor.

I plugged the Serial Light Adapter into the Ethernet board, the USB cable into the Adapter, and then finally the USB  cable into the computer. Windows immediately picked up the new device and assigned a COM port to it. The Arduino IDE could then be told that there was an Arduino Ethernet board on that COM port.

So, time to learn the Arduino Programming Language. The language is apparently based on another language called Wiring. Put simply, its C++ with some other libraries based on the AVR code set used for the Arduino’s microcontroller – the Atmel Atmega. Fantastic, who doesn’t love C++ (that was fantastic news to me – I actually do love C++).

Let’s look at a very basic Arduino program. My first one as it were.

What does this code do? Not a whole lot. However, the first program should always be simple to provide some validation:

Well, it worked. I was very very pleased when I saw the message “setup()” appear on the Serial Monitor, followed by the message “loop()” every 2 seconds after that.

With the garage controller interface understood and the basic operation of the Arduino under control, it’s time to design the circuit.

6 thoughts on “Adventures with an Arduino – Part 2: The Kit.”