“I find your lack of faith disturbing.” – Darth Vader

Well, the big day has finally arrived – Windows 10 launch day. Granted, I know the beta and various insider editions have been available for a while, but I made a decision back after the first blue screen I had while installing NT 5 beta (1999), that I was happy to wait for the final release version of an operating system before using it.

As such, Windows 10 is here and in numerous editions too. I’ve had my Windows 8.1 laptop and desktop preregistered for the free upgrade for a while, and I was pleased when they told me they were ready to install. Sure enough, 15 or so minutes later they had rebooted as Windows 10. They were actually the first OS upgrades of Windows I’ve done since upgrading Windows 3.11 to Windows 95 for a government department – definitely a much smoother and faster process than the last time.

The upgrades went extremely smoothly – which will likely not mirror everyone else’s experience, but the computers were both under 2.5 years old, with all of the right drivers installed, and not a lot of random crap. In addition, they were clean installs to begin with – not the OEM builds provided by the manufacturers (Dell and Lenovo). They were also fully patched. The systems rebooted, connected back to the network, loaded the old apps, and generally turned out quite well.

Where I did encounter the first issue, and its likely only temporary, was when I wiped the laptop and did a clean Windows 10 Pro installation (after having already upgraded 8.1 Pro to 10 Pro). I downloaded the Windows 10 Multiple Editions ISO from the MSDN site and created a bootable USB drive using Rufus – which is a good tool for creating a bootable USB drive. I created a UEFI installable version, and plugged the drive into my laptop.

The install itself went very well – I left the product key field empty and let it install. The theory here being that because I’d already upgraded that machine from 8.1 Pro to 10 Pro – the Windows Store was supposed to have remembered my computer and stored a product key there for me. Alas, this was not the case. The system installed, and then immediately complained about the lack of product activation. I received the 0xC004C003 error message which essentially means my product key is blocked/locked out. After some research, it turns out this is a known fault for clean installs of Windows 10 after an upgrade, and that it should sort itself out in a day or so. These things happen, so I’ll just keep an eye on it over the next couple of days.

Where it gets even more fun though is the fact that you can now install Windows 10 on a Raspberry Pi 2 – the Windows 10 IoT version. Once I downloaded the IoT version, I ran the installer on my desktop and it gave me a network IoT device manager/browser tool and a Windows 10 IoT image + installer.

So, first things first. I ran the IoT image helper and copied the supplied Windows 10 IoT image to a 16GB MicroSD card.

I put the MicroSD into the Raspberry Pi 2 and it booted straight to Windows 10 IoT. Then I was able to discover it and manage it from the desktop – although limited configuration could also be applied from the console of the Raspberry Pi 2.

From there, you simply right click the device and have it open a web browser to the device’s management URL. The default user name and password are administrator and p@ssw0rd. 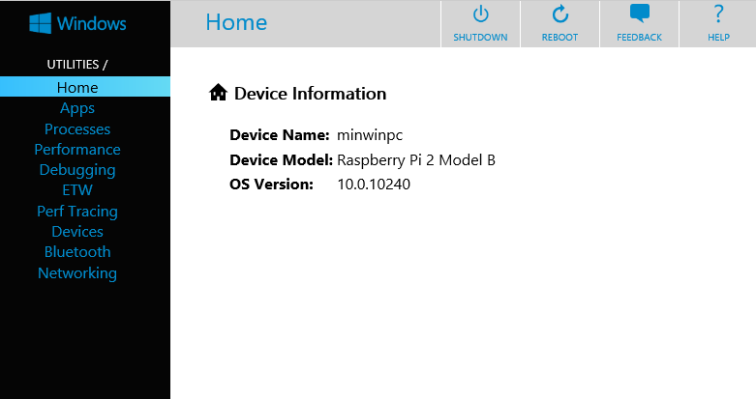 So 3 devices moved to Windows 10 – happy with that. I need to do a clean install of it on my desktop, but I need to find a time when I can go without what’s on there – as some of the games take a while to reinstall.

The next action after that is to start experimenting with Visual Studio 2015 IoT application development – writing a universal windows application for the Raspberry Pi 2. I still need to be convinced that the Windows IoT version will be more useful to me on that device type than ArchLinux, but I’m hopeful. The Mono .NET implementation still leaves a lot to be desired, so I’m keen for alternatives. I will write an entry when I’ve done the first sample application.