It’s time to start building the device. I did actually build an LED into the circuit as well so that I could see a light turn on when the relay activates. That was more for fun than anything else. It wasn’t needed, but it was a little more soldering practice that I could get in 🙂

Time to get out the rusty soldering skills – not soldering with a rusty iron, but skills that have long since become rusty. It has been many years since I’ve soldered anything; as such, a couple of the connections have a little too much solder 🙂 P for Plenty. Or in this case P for a little bit poor. 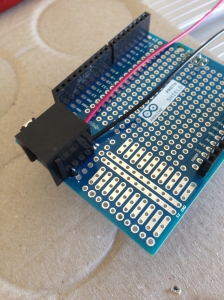 The photo above shows where I’ve attached the RJ12 socket. I needed to drill a couple of holes through the board to clip in the socket. The phone line cable that I ran to the garage controller in the first entry – I crimped a connector onto the other end so that I could plug it into my device rather than hard wire it.

Now I have the relay and diode, plus my LED with its resistor.

This is the bottom of the prototype shield board. Not the prettiest, but they get better 🙂

Here is the completed build inside its enclosure. I’ve connected the Ethernet and the garage controller cable. As you can also see, the device is now being powered externally rather than relying on USB power through the programming device. For this, I purchased a 9V switch mode power supply. The Arduino is expecting 7V – 12V, so a 9V supply is just fine. The Arduino then converts that to a regulated 5V to run the microcontroller. The good thing about this range of power supplies (which I purchased from Jaycar), is that they come with a range of plugs including one to fit the DC input connector on the Arduino. Simple.

I had to perform some slight modifications to the standard enclosure to close the gaps around the RJ12 socket, as that socket was smaller than the enclosure was expecting. This was done by cutting a small frame out of an ice cream container lid and then painting it black. I’d rather avoid too many open gaps in the case.

And that’s it. My first Arduino project – my first project incorporating Computers with other electronic devices. In the next entry, I add some further functionality so that I can detect the current state of the door. It’s no good being able to open and close the garage from another country, if you don’t know what state the door is in at the time.

As a final conclusion to the project, the web page was deployed, the firewall rules adjusted to allow the traffic for that application, the page added to the home screen on my wife’s and my iPhones. As I mentioned earlier though, there were other methods of triggering the controller, but using a ‘pretty’ front end on the phone via an ASP.NET web page was my personal preference.

One thought on “Adventures with an Arduino – Part 5: The Build.”