“Several transmissions were beamed to this ship by rebel spies.” – Darth Vader.

In my most recent post, I tested the Bluetooth module for compatibility to the iPhone – which was successful. I then moved on to the more complex part of the project which was to see if I could capture GMLAN messages on the low speed (33.3Kbps) single wire CAN bus (SWCAN) of the car (Holden VE International). If you recall, the purpose of this was to enable me to listen for steering wheel track change messages, and then to feed those commands to my Bluetooth audio controller causing a Bluetooth song/track change. It took a bit longer to achieve a successful test than I was hoping for as there was very little documentation available and many forum posts with incorrect, misleading or incomplete information.

As such, in this post I’m going to be very detailed in the hope that it helps someone else achieve a similar goal. This post has four key sections – background information, CAN Bus Shield, ODB-II pin-out, and sample code. This post contains all of the information you will need to connect an Arduino with a standard CAN Bus Shield to a Holden VE Commodore International.

For reference, the Holden VE Commodore uses a high speed (500 Kbps) and a low speed (33.3 Kbps) bus for connecting the internal systems. The high speed bus is used by the primary vehicle control systems (devoted to the operation of the car), and the low speed bus is used for the peripherals (like the stereo and steering wheel controls). I was able to gather this information from a useful article here. I then used the pin-out guide from here (second table), which indicated that the low speed SWCAN bus is actually on pin 1 of the car’s ODB-II socket – which is a pin not commonly used in ODB-II connectors. That information also lined up with the article mentioned above, so I was reasonably confident it would work. As such, I needed to build a plug with connectivity to pin 1 and pin 5 (signal ground) – and ignore all of the other pins.

Here’s the key component – the SparkFun CAN-Bus Shield. Even though this shield is designed for high speed CAN, we can drop the baud rate down to 33.3 Kbps and still operate. 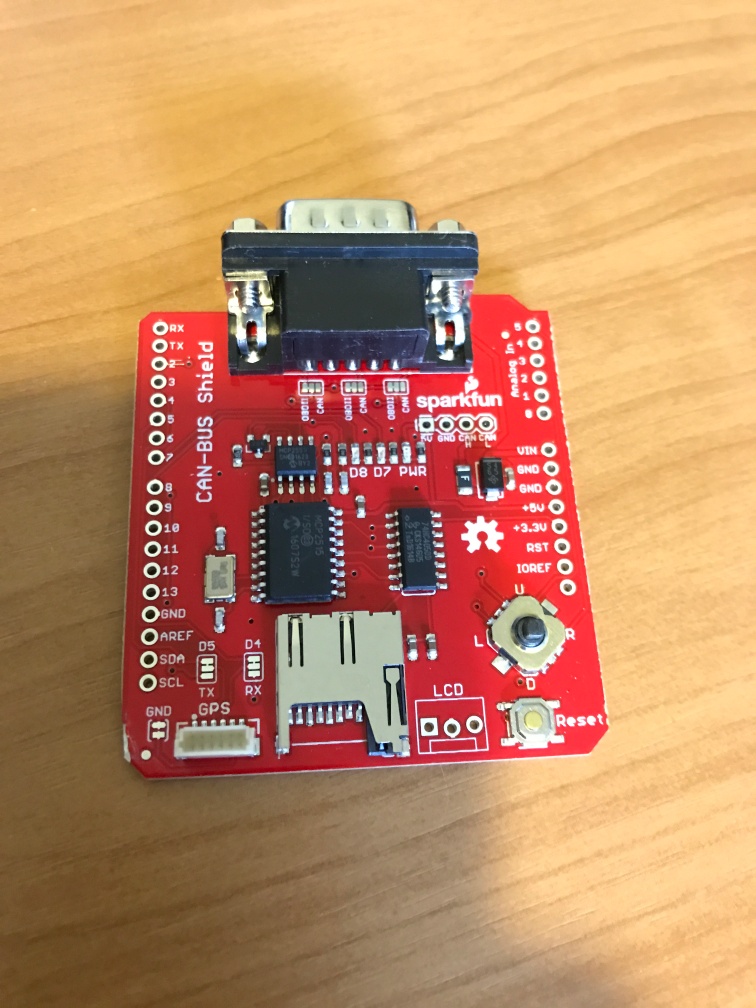 I also bought (a while ago), an ELM327 USB scanner from eBay. I disassembled it and extracted the ODB-II plug which I then desoldered ready for interfacing to my circuit. I connected a couple of leads to pin 1 (SWCAN) and pin 5 (signal ground). That ‘melted plastic’ look was actually like that when I removed it from the ELM327 – honest. White is pin 1, and orange is pin 5. 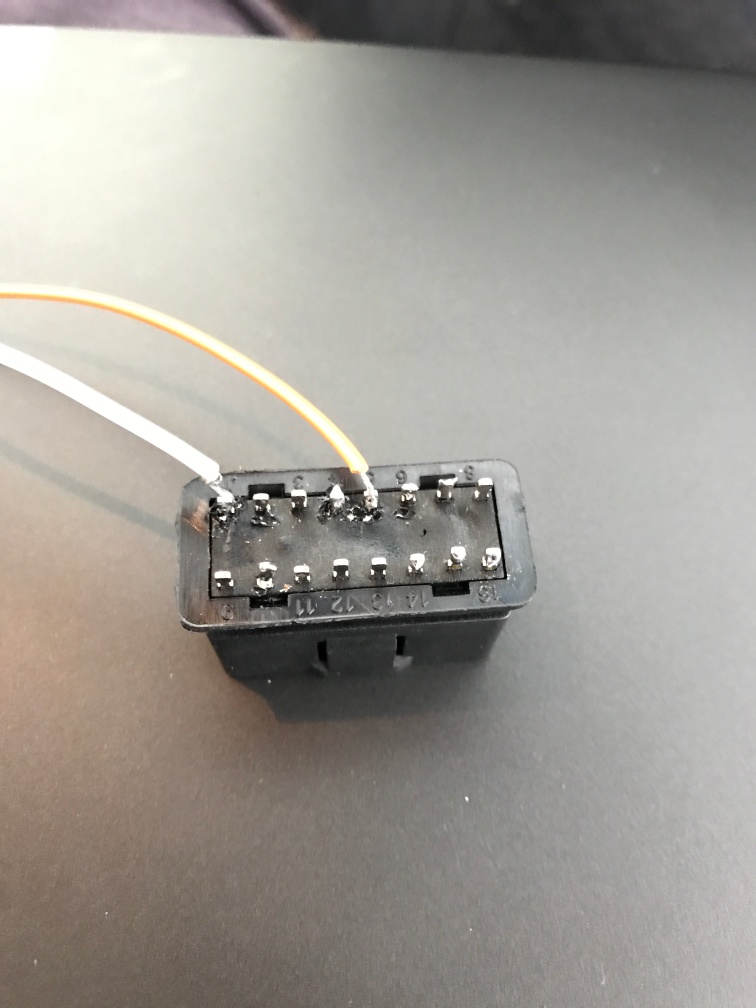 Here they are side by side. Note, I’m just using a standard Arduino Uno R3 as the base board. 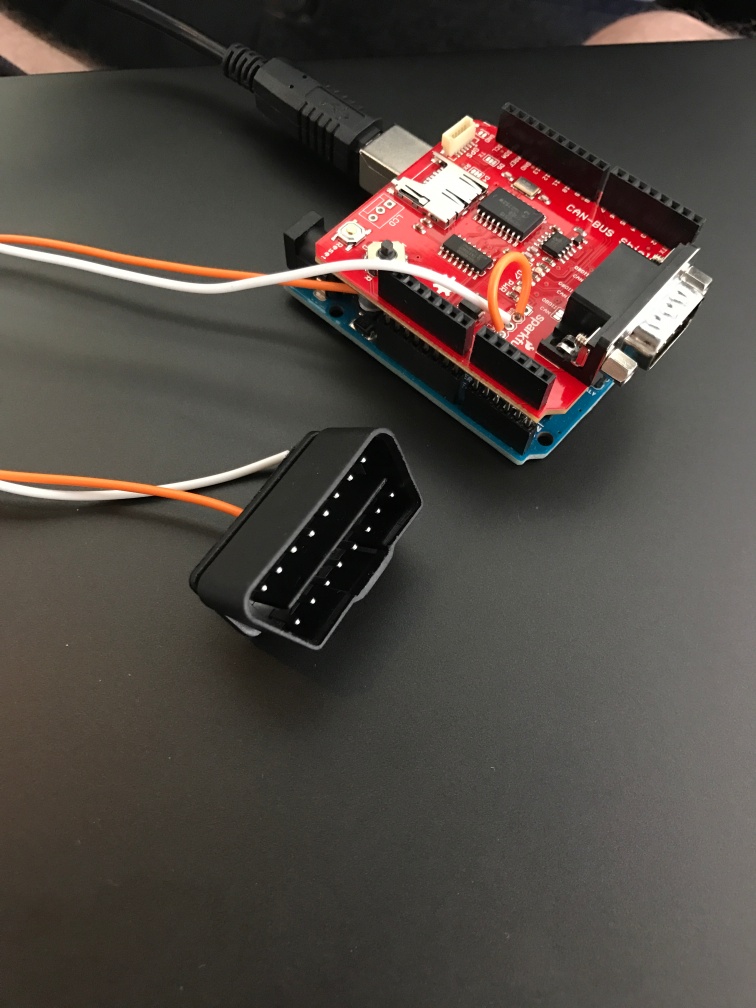 As most of the libraries for the CAN Bus shield do not cater for a 33Kbps baud rate, I ended up finding an alternative library here. I also used this spreadsheet for a reference to confirm that I had identified the correct signals for the steering wheel controls. I opened one of the samples that came with the library, and then tweaked it slightly for the proof of concept. Note in the setup() function, the baud rate is specified as CAN_33K3BPS (33.3 Kbps).

I connected it all together, turned the ignition on (for the stereo) and started using the track up/down buttons. As you can see in the screen below those messages were identified and displayed. The code itself is pretty messy as its one of the library example files tweaked slightly to ignore any messages not from the steering wheel (messages with an ID of 0x100D0060). It looks like the shield (the controller on the shield specifically) can be configured with its own filter to help me capture just the messages I’m looking for, but I’ll worry about that in a later build. For now, I’m just ecstatic that I can see the messages coming in.

For reference, and this is described in the spreadsheet, I’m receiving 4 byte messages (4 bytes of data anyway) like this: 0x00 0x00 0x01 0x00. The 0x01 indicates the track change wheel has been clicked up once. If I clicked it up a few times in quick succession, that 0x01 would be something like 0x03 (for 3 clicks). Likewise, a 0x1F indicates a single downward click, and a 0x1E indicates two downward clicks (counting down from hexadecimal 1F). A message of 0x01 0x00 0x00 0x00 would indicate the track change wheel had been pressed (its also a button). I’m going to use that for play/pause.

With that sample code running, any other button press on the steering wheel should display a message on the screen as well.

With the Bluetooth and the CAN Bus now operational, I can put the complete prototype together and integrate it with the car. If the prototype is successful, I’m going to rebuild the device and mount it inside the stereo itself. The stereo has a lot of empty space inside with access to power, the CAN-H line (as the stereo is connected to the low speed CAN bus as well), and the AUX audio input. As such, the entire device will be self-contained in the stereo with no external cables.

Exciting times. On to Part 5…